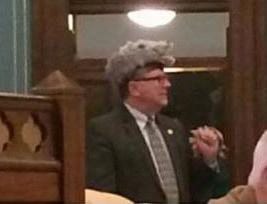 On December 1, 2016, Michigan State Senator Tom Casperson introduced SB 1187 which authorizes the politically appointed Natural Resources Commission to designate the wolf as a game species and establish a wolf hunting season. It also included an appropriation which excluded it from the veto referendum process.

Voters already said “NO” to wolf hunting twice and now their voice has been silenced.

SB 1187 passed the Senate on 12/8, without a committee hearing, and was referred to the House Committee which had “recessed” but reconvened just to pass the bill and send it to the full House. The bill was not given an honest debate – all amendments to protect the wolf were rejected. It passed the House on 12/14/16 and sent to the Governor.

Despite rhetoric from Michigan politicians, livestock losses caused by wolves have been extremely low.

There are approximately 900 working livestock farms in Michigan’s Upper Peninsula (where there are 618 wolves). Less than a handful of farms experienced a verified conflict with wolves. Several events are questionable. For example, at one of the seven farms, the investigation showed that bear tracks and “possible” wolf tracks were present. It was categorized as a wolf incident because the producer had a conflict some time prior to 2016.

At another farm, a producer received payment for a missing calf simply based on the allegation that loggers saw wolves in the area.

There are about 50,000 head of cattle in Michigan’s Upper Peninsula. 31 livestock animals were reported to have been killed, injured or missing as a result of wolves. 22 were at one farm.

Reward now up to $16,500 for person who killed rare red wolf in wildlife refuge